I was at Michèle’s place recently and was browsing through her small but valuable library of cook books when one titled Tourtes, feuilletés et autres pies caught my eye. On the front cover was this delicious looking meat pie that had me drooling over it. There are a lot of interesting recipes in this book and I couldn’t decide which to try it out … so here comes Pierre, my knight in shinning armor (or more exactly a Mystic Blue coupé – times change😉) to the rescue. After browsing the book for a long while and salivate at a few pages, he picked on this interesting recipe and this is what we had for dinner that day.🙂 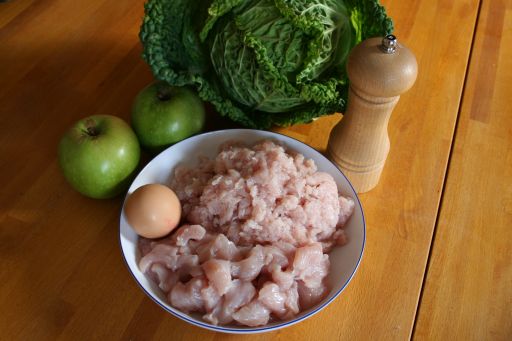 This is the first time I’m baking this dish so I wasn’t sure what to expect. For me, the pie itself taste fine: it has the nice flavour of the meat and cabbage, but it’s overall kinda flat (a feeling that my in-laws also share). Perhaps I’m used to eating my food with lots of spices and not used to something that is relying more on just its flavour without any spices enhancing it. Pierre on his side somewhat likes it (funnily for someone who doesn’t really like cabbage) and had a second helping too, but felt that there was way too much stuffing.

In preparation of this pie, I forgot to mince the apples together with the turkey meat so I did them both separately. We replaced the dry white wine with apple cider (we ran out of white wine in our cave and since we have apples in the recipe, we thought «why not?») and thick crème fraîche instead of the liquid version. We were somewhat taken aback by the large quantity of water that our stuffing produced during cooking and baking. In the end we had to scoop out the water. We don’t know if this is due to the fact that we used apple cider instead of wine (we don’t believe it should make much of a difference) or maybe I didn’t drained the cabbage well.

We both felt that there was way too much meat in this pie compared to the quantity of crust, and would recommend cutting the quantity by 1/3 if you attempt the recipe. Also the book called for 1/3 of the turkey to be cubed. To us, it doesn’t really make a big difference in taste and the chunks of meat aren’t very nice to munch.

When choosing savoy cabbage, choose a head that’s heavy for its size. The leaves should be crisp, not limp, and there should be no sign of browning. Refrigerate, tightly wrapped, in a plastic bag for up to 1 week. 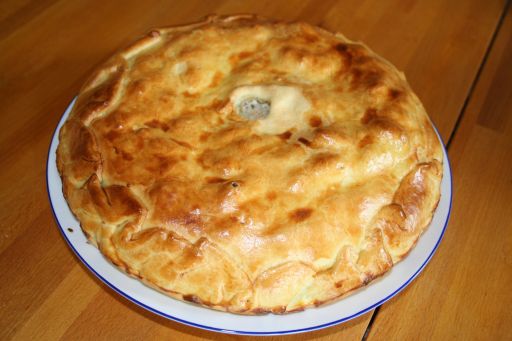 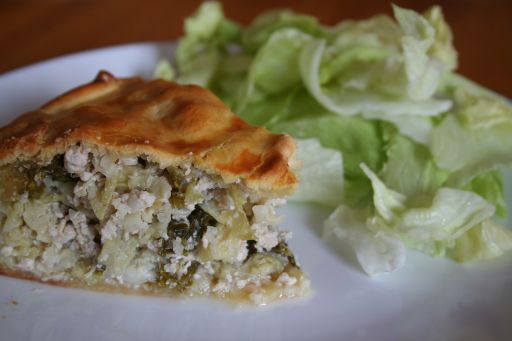