Little One caught a bug after New Year and was sick for 3 days. It was no fun for her and me. You would think with her being so sick, she would be calling out ‘mama’ all the time …. oh no no no, the first word Miss Cheeky cried out while being so sick in bed in the middle of the night was Babar (the elephant) – her favourite story character. Each time she woke up, it’s ‘Babar’ or ‘mama, Babar’ – meaning she wants to watch her favourite DVD Babar. Since then, it is always Babar, the first thing that is on her mind when she wakes up. I think we made a mistake when we introduced her to Babar.😛

Back to cooking, today I’m going to share with you a very nice recipe that involves lots of eggs and cheese.😁 A Soufflé is easy to whip up yet delicate to bake. It’s spectacular looking but must be eaten immediately after taken out of the oven or else it will crumble under its own weight. (and that would be a pity!)

It turns out very beautifully even when we removed it from the mould. For me, the taste is a bit like scrambled eggs with cheese. I simply love it. The texture is like soft bread that melts in your mouth. Little One who doesn’t like cheese nor eggs was tugging in her share mouthful after mouthful.

One warning though, this soufflé is more nourishing and filling than it looks. After a few mouthful, I was already full. Given the ingredient list, it’s not entirely surprising, eh? 😉

Soufflé goes very well with white wine like Bourgogne or Alsace. Other cheese than emmental should work, it might be interesting to experiment here. 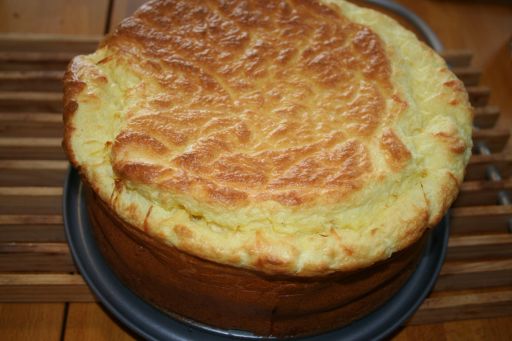