I have made these cookies many times but I never really given much thought on the chocolate nut spread I used on it till Pierre asked me that day ‘Do you know how Nutella came about?’ ‘No. I don’t think there’s anything interesting about it. It’s just some modern invention.’ Pierre: ‘You should look it up. You’ll be surprised.’ Now that got me curious. So, here’s some history lesson for you and me.🙂

Nutella®, in its original form, was first created during WWII by Mr. Pietro Ferrero, a pastry maker and founder of the Ferrero company. At that time, there was a shortage of cocoa due to rationing, so Mr. Ferrero used hazelnuts, which are plentiful in the Piedmont region of Italy (northwest), to extend the chocolate supply. The original version of Nutella spread was called pasta gianduja – pasta means obviously paste, and gianduja is the name of a carnival character famous to the region, a character that can be found in the first advertisements for the product. This original form of Nutella was actually made in loaves and wrapped in tinfoil, so it could be sliced and placed on bread for mothers to make sandwiches for their children. But many children would throw away the bread and only eat the pasta gianduja! So Mr. Ferrero altered the product into a paste that came in a jar, that could be spread on the bread as well. This then became known as supercrema gianduja because it was a spread-able version of the gianduja. Supecrema gianduja was eventually renamed “Nutella” in 1964, with the origin of the word being “nut” and the “ella” giving it a soft ending. So now you know.😉 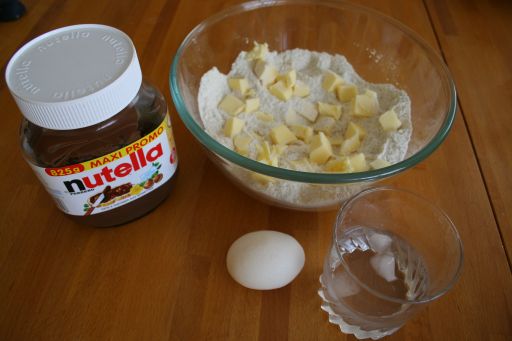 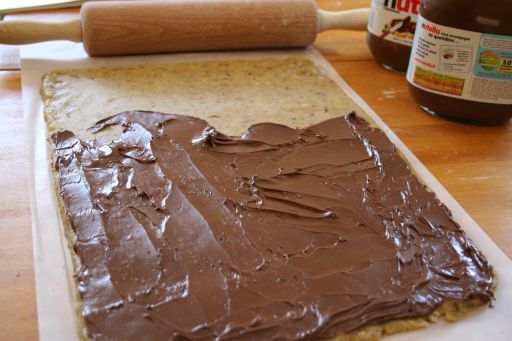 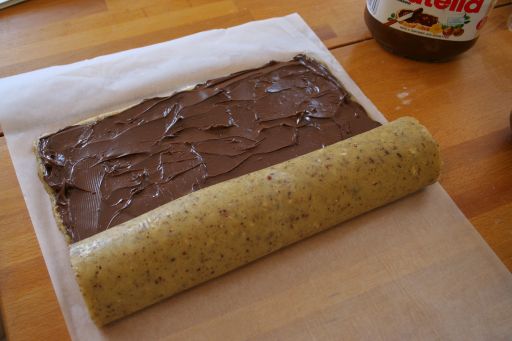 As Nutella is very tasty (this reminds me of the scene in Joe Black where Brad Pitt was licking deliciously his spoon), it is a nice base for these cookies, making them rich in taste and flavour. Great tea treats.🙂

For that extra punch: crunchy and nutty flavour in every bite – I added some chopped hazelnuts into the recipe and an extra 20 g (approx) butter. It turns out very good and exactly what I wanted. We both love this modified recipe.

Regarding the spread, don’t go over zealous with it or else you would have Nutella spilling all over (although it was finger-licking good) and will have a hard time slicing the dough. Don’t make the same mistake as me. I gave an extra dose in mine because Pierre complained that I always spread too thin a layer. When I had to slice it, aïe yaï yaï, what a mess! In the end, I had to use dental floss string to cut the dough. That saved the day.

You can use ground macadamia nuts in place of the hazelnuts.

The cookies can be stored in an airtight container for up to 3 days. 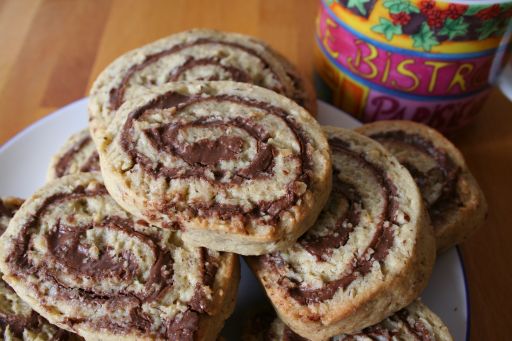