The very first cornbread muffins I tasted was at Dan’s Ryan Chicago Grill restaurant, Singapore : they serve some of the most delicious muffins in town. Ever since, I have always wanted to try my hands at making this muffin but never really had any motivation to do it until I saw a cornmeal challenge online last week. Although it was too late for me to enter the challenge, the idea has since stuck in my head to make something out of cornmeal. So I went through my small library of cooking books and found this book that my sister-in-law gave me from USA. 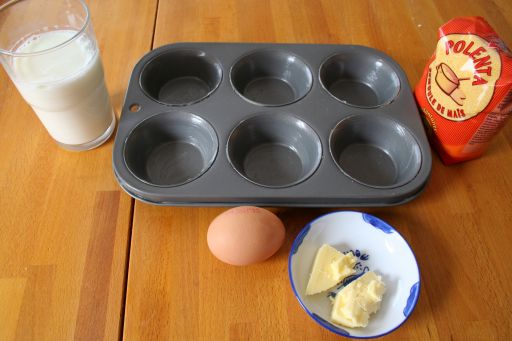 The muffins are crusty on the outside, somewhat moist and soft inside, but sadly they didn’t seem to react to the baking powder and look rather flat and compact. To me, it still taste OK, not as bad as I initially thought it would be but not ‘wow’ either. Pierre likes it so did my 1 year old. In fact she rather eats this than her lunch.

This is the first time I’m making this cornmeal muffin so I’m no expert in what the final result is supposed to look or taste like. Another thing is that I have tried to find out what exactly is cornmeal in French but no luck. From the internet, it says polenta (as used in Italian cuisine) but Pierre doubts it. Anyway I decided to try it out using polenta.

As for the preparation, I happened to have US measuring cups (another gift from my sister-in-law) – 1 cup polenta = 163 g (I measured it on my scale but one internet site said the conversion of 1 cup cornmeal should be between 128 – 130 g) and 1 tbsp butter = 15 g. I have halved the recipe because making a dozen is just too many for us to finish.

This recipe uses no flour. According to the book, beating the egg whites lightens the muffins, making it not too heavy. 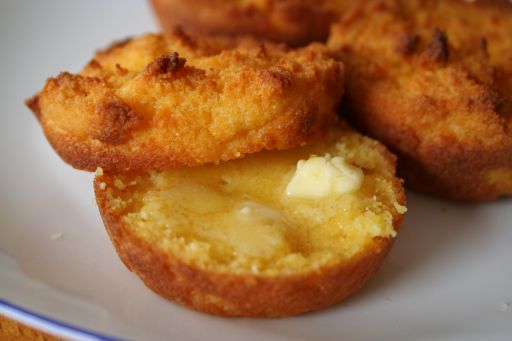