Pierre has this French regional cook book sitting on his shelf for many years – given by his mother to motivate him to cook something more grand than his famous carbonara😁. I have flipped through this book so many times before but never really dared to try out any of the recipes. Then the other day I was just having another glance at it and I stumbled upon poivron rouges farcis, I looked up the ingredients and it did not seem too complicated to do plus I have everything I needed to cook this dish in my fridge. So why not? 🙂

This dish is linked to the city of Perpignan from the Roussillon region (a sunny area in the south-east of France, along the Mediterranean sea and the Pyréenés mountains) which of course produce southern/Mediterranean cuisine.

And this is my entry for WCC 18’s Red and White theme. 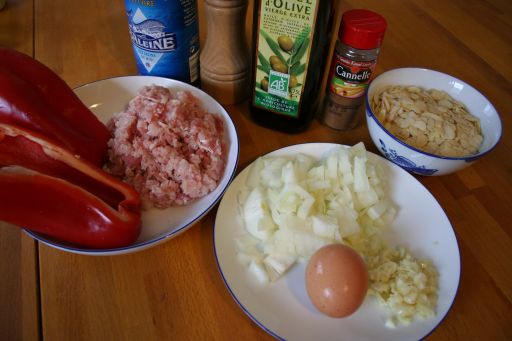 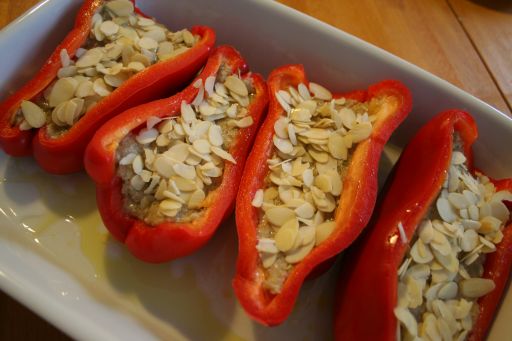 Mmm… very aromatic. The stuffing is nice, tender and fragrant with a tint of cinnamon. Surprisingly the cinnamon blends very well with the rest of the ingredients in the stuffing – it isn’t overpowering like I thought it would be when I was mixing it. The combination of the meat stuffing and the red pepper give a unique and tasty taste. I’ll definitely cook this again.

My preparation of the above stuffing was done with a food processor. First the meat was chopped up a bit before adding the onion, garlic, parsley and bread. Once it is mixed and chopped up, in goes the egg, oil, cinnamon, salt and pepper and mix till it is homogeneous. Saves a lot of time and I only have to clean up my food processor. 🙂 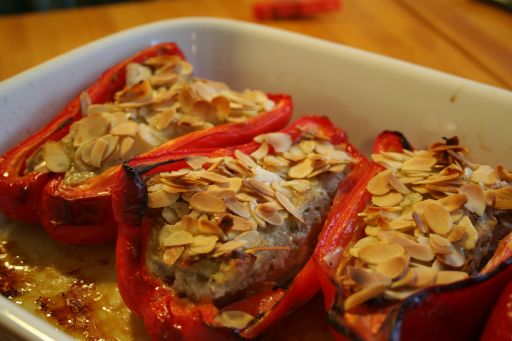