What made me bake apricots ? The craving came about a week or two ago when I ate some very delicious ones at my mother-in-law’s house (it’s now apricot’s season). Try as I might, I couldn’t get them out of my head. When I read about Domestic Goddess’ sugar-high Fridays, the idea of cooking them Tatin‘s style came to me – it’s one of the richest kind of fruit pie, right ?

The story of the Tarte Tatin invention is a bit fuzzy, but is known to originate from the Hotel Tatin (run by the two Tatin sisters) in Lamotte-Beuvron, France in 1889. The legend of this upside-down pie claims that it was first made by accident, although reasons for such accident are not very clear. Although the original recipe use apples, variants are now made with other sweet fruits like peaches and pineapples. 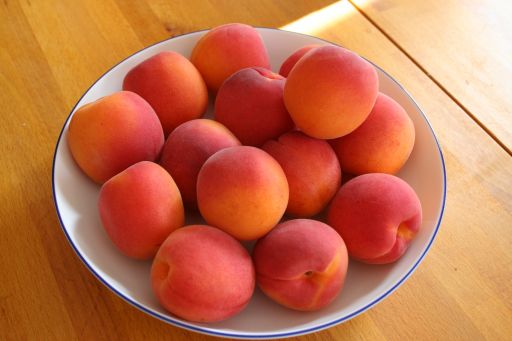 Without too much surprise, the apricots make the tart a bit acid, but I kinda like it. The taste grows on you – the full apricot flavour in each bite with a mixture of sweet and acid taste at the same time. To me the pie was as good with ice-cream as on its own. Pierre (who has a sweet tooth) feels that it was nice but it was a bit too acid to his taste, and the ice cream brought a welcome balance. We both felt that another 30 g sugar to the caramel would have made this tart even better, and I could bake it again with pâte sablée instead and maybe try some cinnamon on top (or is that the bottom ?😉

I have never made this tart before so I had my doubts on how it would turn out. When I took it out of the oven, the apricots had lost a lot of juice and I thought all this water would ruin the crust and create a disaster. Surprisingly when flipped the baked tart over, it turned out beautifully.

Please add another 30 g of sugar to the caramel base. You can also make the caramel with water instead of butter. The pie would look prettier if you put the bottom side of the apricot on the caramel. There are 2 methods for baking it, one in two steps as I mentioned above and the other method is to simply put the pie crust on top of the apricot immediately and bake them at the same time for about 30 minutes at 200°C. 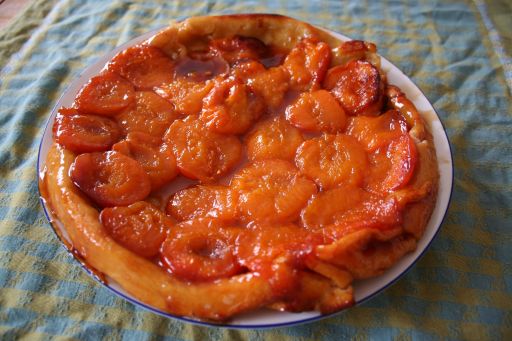 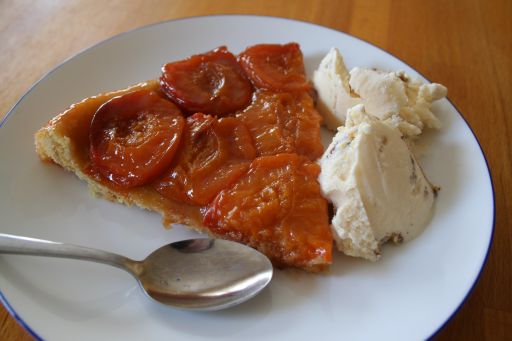