I was recently stung by les orties (or stinging nettles in English) while picking blackberries in the countryside. Ouch! Not only did it hurts like hell, I was rewarded with beautiful hives and I scratched myself like a monkey – as if the blackberries’ thorns were not enough. This smart little plant hides itself among the blackberries for those unsuspecting souls like me to get stung. It’s virtually everywhere in the French countryside and when we take a walk in the wild fields, we have to be extra careful and on the look out for it especially during summer – sleeveless and in shorts.

Stinging nettles are abundantly found in the countryside in northern Europe, much of Asia and in parts of North Africa and North America. The defensive hairs (the needles) on the stinging nettle are very sharp. Once they penetrated the skin, they break and injected a harmless toxin – a stinging burn sensation and itches afterwards. And much to my surprise, I learned from Patrick (my father-in-law) that this irritating plant (pun intended) can be made into delicious soup – apparently it is a favourite soup of his mother. Nettle soup is even supposed to be a good source of nutrients for people who lack meat or fruit in their diets.

Surprisingly this nasty nettle have also many other uses.

From what I could find out:

What about those stinging hairs? you might ask. Well, it seems that cooking, crushing or chopping disables it. The stinging nettles are high in nutrients: calcium, magnesium, iron, potassium, phosphorous, manganese, silica, iodine, silicon, sodium, and sulfur. They are also a good source of vitamin C, beta-carotene, and B complex vitamins. Not bad for a weed! It is best to pick the first leaves of spring but it also can be picked during summer. 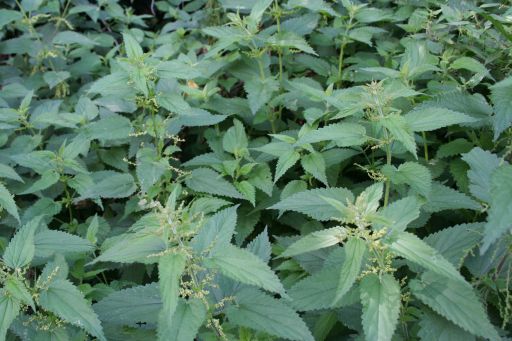 There is no verdict this time as I didn’t make the soup but according to Patrick, this is a very nutritious soup that costs you almost nothing as you can pick it for free from the nature.

In terms of taste, the nettles has a very raw green taste (a taste quite near to that of a French bean). Patrick compares it to the taste between spinach and sorrel. He made a pot for his mom during our vacation in Brittany, unfortunately I didn’t think of checking it out just for the taste of it.

Avoid gathering the nettles growing by the road side (polluted by traffic) or by a frequented walk path (might be polluted by humans or their pets). You should pick the tops of young plants only and not flowering.

Some soup recipes cook the nettles with spinach, carrots or celery and stock instead of water. Others chop it up and eat it like salad or cook it in quiche or in gratin. The fresh or dried leaves of nettle can be used to make a tea and commercial tea bags are commonly sold in natural food stores.

According to Michèle, if you get stung you can apply vinegar on the affected area and it will calm down the reactions.