We were at the supermarket doing our usual weekly shopping. I paused by the vegetable section trying to figure out what to cook and buy… Finding something that both Pierre and I likes and that is a bit new isn’t easy since he doesn’t like most of the vegetables and our taste are so different. Suddenly Pierre came by and suggested : ‘how about we make gratin d’endives au jambon?’ … I wasn’t very enthusiastic about it at first as I don’t like anything bitter and endives have a very bitter taste however Pierre assured me that it wasn’t that bitter once baked and drowned in sauce. OK, why not?

Endives (Cichorium endivia) was, like so many other things, invented by accident. The technique for growing endives was discovered in the 1830s by a Belgian farmer, Jan Lammers in Schaerbeek, Belgium. Upon returning from war, he found his stored chicory had sprouted white leaves, and that it still tasted OK.

Nowadays the plant is grown underground or indoors away from sunlight, to prevent the leaves from turning green and opening up. As such, it is also often sold wrapped in a protective opaque paper or plastic to protect it from the light. The whiter the leaf, the less bitter the taste; but to make it easy in the mouth it’s recommended to cut out the harder inner-part at the bottom before cooking. Today France is the largest producer of endives (yay!).

Rich in vitamins, minerals, especially in folate and vitamin A & K, the endives are also high in fiber. They can be eaten raw as salad (great with dices of blue cheese and walnuts), or cooked in various ways: stuffed, baked, boiled, steamed or fried.

How to choose and store Endives?

Select those that have crisp, firm, tightly pack heads no longer than 15 cm (or 6 inches). Good endives are creamy white with a yellowy green tinge to the leaf edges. To avoid them from turning green and becoming bitter, store them in the refrigerator wrapped in kitchen paper and placed in a plastic bag.

Here’s my entry for this week Weekend Herb Blogging host by Haalo from Cook (almost) Anything At Least Once. 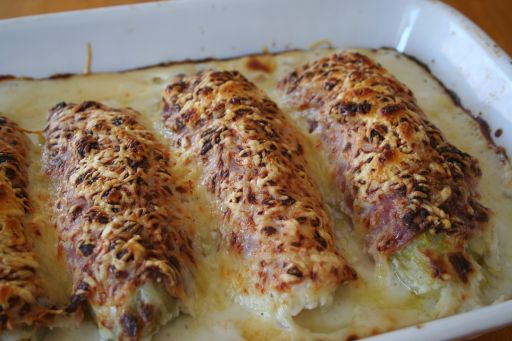 All I can say is that this one is a keeper. I love it – the taste of the ham and endives with béchamel sauce is delicious – salty, creamy … the endives just melt in my mouth. There was no taste of bitterness at all except at the base – just a tint of bitterness. Even my little daughter loves it, it looks like a great way to get kids to eat some veggies. 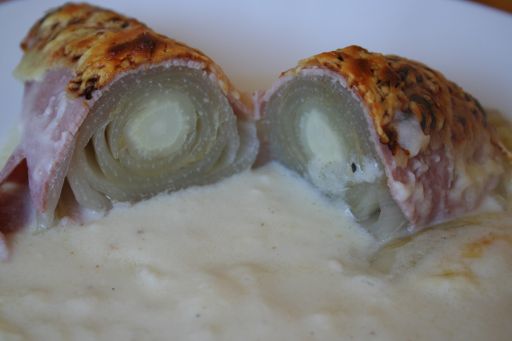