Last weekend our whole family was hit by gastric flu. What a torture! It was the first time Little One got sick (poor baby) but amazingly she fought it off rather well and recovered from it very quickly. While she was on the mend, I caught the bad bug and was violently sick (I thought I had it bad). Luckily Pierre was still OK then so he could look after Little One. Then as I got over the worst, it was Pierre’s turn to be sick to the gut. Unfortunately for him, the virus hit him the hardest (I have never seen him in that shade of gray). The next day, both of us were lifeless, while our little darling had her energy back and went on trashing the whole house. We have never been hit by an actual tornado, but now I have an idea of how it would look like afterwards.

I made this pie a day or two before all of us fell sick (rest assured that the two events are totally unrelated). There were some leftover old apples and over-ripened bananas on the table (as usual). I didn’t want to make another apple/banana pie so decided to add some pineapples in it to give it a more exotic taste. Then I thought why not a coconut crumble top – it would go very well with it. Originally I wanted to use a plain pie crust but was inspired to make a nutty pie crust for a change. All those ideas combined this over-the-top recipe :

Over The Top Pie 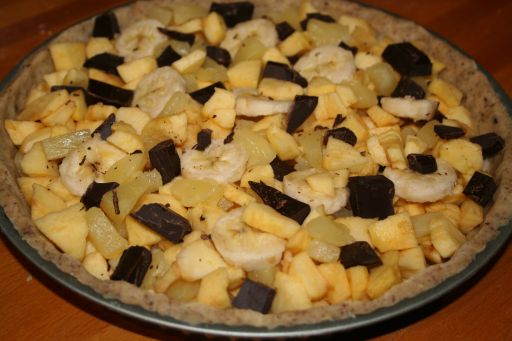 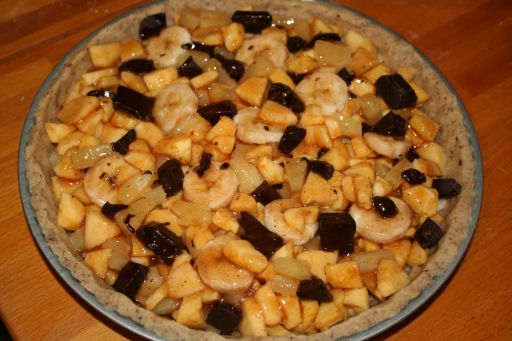 The whole pie itself tasted not bad at all – it has a different taste at each bite : sometimes apple/banana and other times pineapple/apple or banana. I was expecting a tangy and strong pineapple taste but was rather disappointed with the weak pineapple flavour. Pierre felt that I didn’t put in enough pineapple whereas I felt that I should have used fresh pineapple instead of canned ones (but I had an old can lying around).

Adding the dark chocolate wasn’t a wise choice as we found out that it overwhelmed the whole taste of the pie whenever we took a bite that has chocolate in it. So it’s best to omit it.

As noted above, it would have tasted better if I had used fresh pineapple and the juice of the pineapple for the syrup spread instead.

For the crumble, it would have been better to just use only grated coconut sans flour. 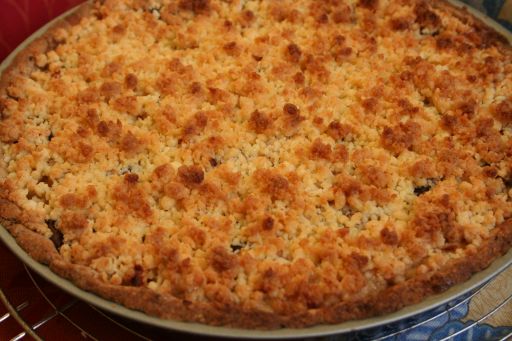 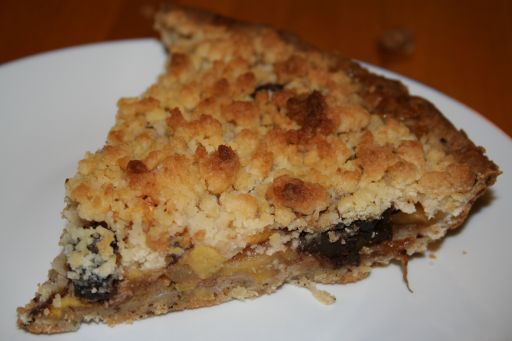