Yesterday we celebrated Mother’s Day in France. The weather was a bit cloudy but that didn’t stop us from doing a BBQ on our terrace.🙂 The honey marinated chicken thighs (that I have specially prepared for Little One) turned out beautifully and delicious but to my utmost disappointment, Little One wanted nothing to do with it. *sigh* Oh well, her loss, our gain.😛 Next time, I’m going to BBQ chicken wings …yummy.

For Mother’s Day, Little One got me a nice Lafuma recliner (via her papa) that I wanted so much for the coming summer days.🙂 Pierre wanted to buy a cake for me but I said ‘why waste money when I can bake one for us.’😉 I decided to take this opportunity to do another experiment. This is what I made yesterday and is part of my contribution to this month’s Sugar High Friday host by Helen of Tartelette :

The cake itself is very aromatic – the delicious taste of orange and almond together. It is compact and just moist – not as dry as I thought it would turned out, and a bit crunchy when you hit on almonds. As for the icing, hmm … not exactly to my taste – I find it a wee bit too creamy and buttery, however Pierre likes the contrast – slightly salty creamy icing with the sweetness of the cake. (salty because we always buy salted butter)

Ooops, I just realized that I didn’t add the right quantity of dark chocolate in my icing. Perhaps that is why my icing tastes so creamy, buttery and salty.😛

I wanted to whip up 3 egg whites but I was clumsy in separating the first one so I ended up with 2 white eggs instead for my above cake.

If you want a more moist cake, perhaps you can add a bit more juice and adjust the baking time. 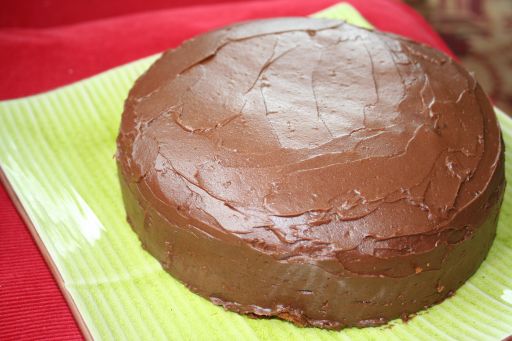 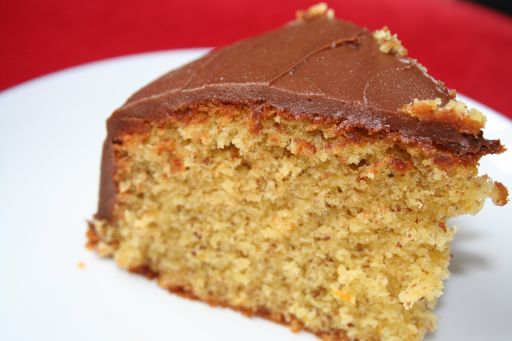