My sincere apology for the delay in posting my mushroom recipe. Settling back to normal daily routine with a little one is hard and difficult after a summer vacation… plus I wanted to get good and precise mushroom information, and it turned out to be a lot harder than I expected (partly because it’s very different between French and English names).

I’m also so sorry for not having new pictures today. Here’s a word of advice: when the new Windows Vista tells you that there’s a problem with your memory card and ask you if you want to fix it, what it really means is if you want all your precious and perfectly fine pictures to be definitely and permanently wiped out. ☹️

As I was saying in my mushroom post, picking mushrooms was very exciting and fun – time just flew by while we were in the forest (to me it seems like the time has come to a stand still – just the gently cool breeze that blew at you once in a while, the sound of birds chirping… well including an occasional barking intrusion from the hunters’ dogs.) I’m so lucky to have in-laws who love nature and who love picking mushrooms or else I wouldn’t have the opportunity to ever experience this. I personally can’t identify which mushrooms are edible and which aren’t… it’s Michèle, Patrick and Irène who guided me. Sometimes we will pick up a mushroom that we are curious about or not so sure of their edible state… once home, my parents in-law usually check out the unsure ones with their mushroom encyclopedia.

The hard work on mushroom trips is to re-identify them and sort it out by the species and throw out whatever that we aren’t sure off or too old. This is to make sure that there are no poisonous mushrooms in it. Then we clean some of the mushrooms, try getting the worms and bugs out of the mushrooms by placing a plastic film over it to seal off air. After a few hours or overnight, all the bugs will come to the surface.

First an obvious disclaimer: picking mushroom and eating them can be dangerous, and sometimes deadly. Some poisonous mushrooms can look eerily similar to edible ones. You should not engage into it without taking all necessary precautions, including asking a specialist (in France, pharmacists are trained to recognize mushrooms and will traditionally help identify them, free of charge). Although I’ve done my best to be accurate, mushroom information below could be inaccurate and should not be relied on when evaluating mushroom edibility or toxicity. 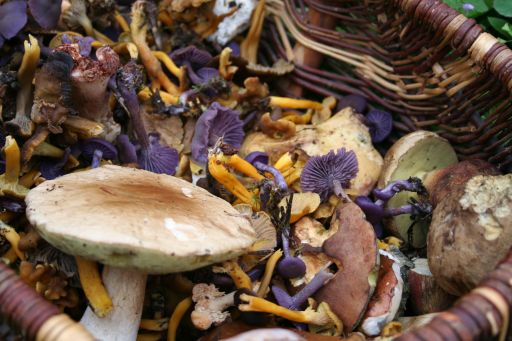 Judy guessed it right that I’m making a pie out of it while Gourmet Traveller,, Orchidea and Karin’s sharp eyes identified: cèpes, chanterelles and craterelles from the basket. To be more precise we had :

This will be my entry for Weekend Herb Blogging host by Katerina from Daily Unadventures in Cooking.

I didn’t know a mushroom pie could be this delicious. The full woody flavour of the mushrooms just fill up your taste buds and the creamy sauce just heightens up everything. It was so good that everyone was fighting for the last piece… Hehehe… Guess who won the last slice? Bet you would never guess it. 😉

Ok… people there is a mystery price to be won here… 😉 Whoever gets it right first gets a French specialty from this region and if the winner is a French, gets an Asian specialty instead.

The bring out the goodness and full flavour of this pie, it’s best to use wild mushrooms, preferably: Craterellus or Black trumpet or Blewit or Chanterelles…or mix of wild mushrooms.