After spending a week in Paris with the public transport on strike, we were lucky enough that the TGV (bullet train) decided to resume work over the weekend and we were able to get home without a hitch 2 weeks ago. Last week it was Air France’s employees turn to stop work – in a big way on La Toussaint’s holidays. Thousands of peoples ended up as hostages, stuck at the airport with no flight to return home for their work the next day or worst … some found themselves spending their holidays at the airport going nowhere. Thank goodness, we didn’t planned any trip. My friend, Bee Ean posted some funny caricatures about this whole mess.

It seems like November will also be a worthy month for strikes: I just heard on the news that EDF (electricity company), SNCF (trains) & other public transport are threatening to go on strike (again) next week. The fishermen, in difficulties because of rising oil prices, are also demonstrating and threaten to block the petrol supplies. Looks like it will be a fun month for the French and Mr Sarkozy. 😛

Anyway, as I was saying, we got back from Paris to find a day old expired bottle of milk in our fridge. We decided to salvage it by turning it into a all time delicious and favourite French dessert, Gateau de riz or Rice Pudding.

As I was pressed for time, I did a simple version of it – just the pudding without fruits and the meringue (we covered it with home-made strawberry jam instead). It still tasted as good but I have to admit that the fruits and meringue version (which Michèle normally makes) give this pudding a special taste and kick. The meringue is soft and creamy – it’s like you are eating a coating of melted marshmallows. 😁 It’s a rather filling dessert that’ll keep you from going hungry too soon. 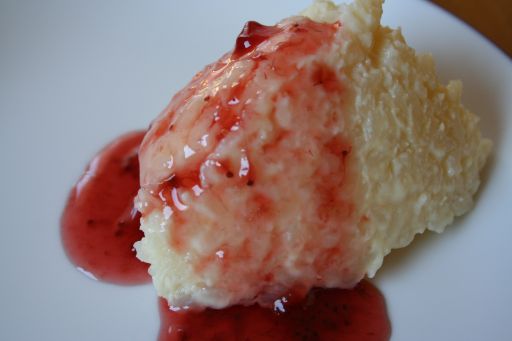