One of the nicest things about living in France (as opposed to my equatorial Singapore) is not just the 4 seasons but the food that come -and go- with them: fruits, mushrooms of course but also cheese or seafood. As we enter Autumn (or are supposed to, as temperature went from a nice 22°C to 11°C in 48h), we have apples, pears and walnuts and chestnuts falling from trees everywhere in the countryside. One simply can’t resist stopping the car to pick them up on the road. Not to pick them up seems like such a waste of food from mother nature.

Two weekends ago, we (parents-in-law, Little One and I) went walnut pickings at the nearby fields of my in-laws mountain house 🙂. We were pleasantly greeted by a herd of cows and calves. At first they were minding their own business, but after a while they got curious at our presence on their territory, looking at us wondering what were we doing bending and picking stuff on the ground. I for one got excited and pointed the cows to Little One, prompting her to wave and holler a ‘mooo’ greetings to the cows and calves.

As we moved further into the fields, the cows decided to follow us up close – pretty cute. I was kinda scared as these cows have long spiky horns but my parents-in-law assured me that they are nice and harmless animals. I watched in fear as one cow moved right next to my mom-in-law who just waved her finger ‘No, no’ telling it not to come so close to her. Amazingly then the cow moved a few steps back from my mom-in-law! I was truly floored. As we moved on, the cows followed us nonchalantly behind us, every pair of eyes were on us, on our movements… gave me the goose bumps like they were seizing the chance to pounce on us unsuspectingly. Knowing that cows are way more likely to be eaten by humans than the opposite wasn’t quite enough to make me comfortable about being around such big horned animals.

Luckily for me, Little One was a good distraction… picking walnuts became sort of a treasure hunt for her, her exclamation of sheer delight at spotting one was very amusing, some went into the pails, a few were kept in her pocket as prized treasure to show to her papa later. Suddenly Little One spotted a cow hovering over our pail of nuts, went close to it, shaking her little finger: ‘No, no… it’s not for you. Go away.’ However the cow couldn’t care less and continued eying at those delicious nuts, Little One started to growl like a little courageous lion cub to frighten it away to no avail. LOL! It was quite a funny scene of David & Goliath 😉. Harmless as the cows may be, they do have those pair of menacing looking horns and could easily flick Little One with it. Father-in-law took caution, shooed the cow away and told Little One not to get too close to them. With both pails filled to the rim with a little mount of pyramid, we had to sadly leave the rest of the nuts on the ground and said ‘Goodbye, till we meet again’ to our companions. What wonderful and fruitful afternoon we had! Wish I had thought of bringing my camera along. Oh well, perhaps I’ll have another opportunity. 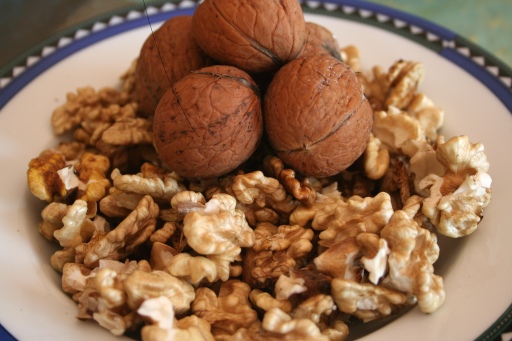 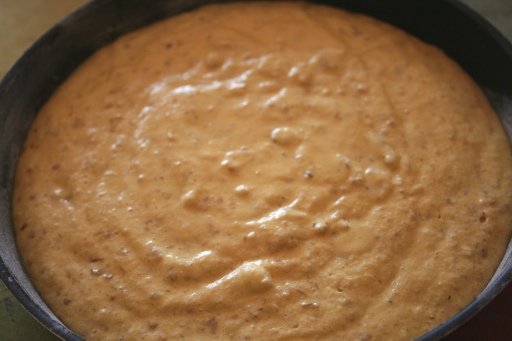 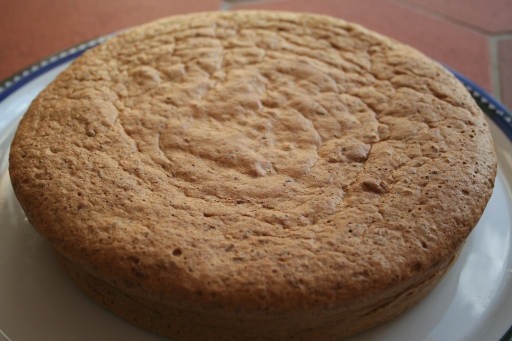 This cake is very light, moist and the nutty flavour is heighten by the chocolate ganache. We ate this with crème anglaise – it was good but we felt that it sort of bland out the flavour of this nutty cake instead of heightening it, so maybe you can forget about this addition. This cake is not very sweet so if you do leave out the crème anglaise, please increase the amount of sugar added to the cake. 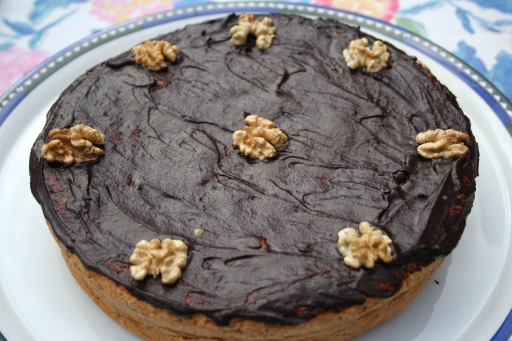 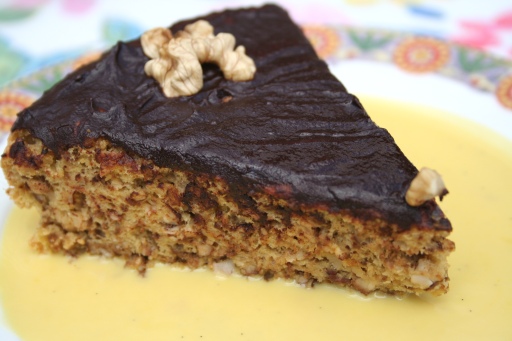