I first heard about Daring Bakers a few months after I started my own food blog. I was intrigued by it and loved the monthly challenges they issue to participating bakers, bringing them to a new heights each month. But I felt intimidated as I was really a novice (and still am!). Now after two years of baking and cooking and lots of hesitation, I decided to just jump right on the wagon and learn how to swim with the experts if I have to. So here I am, my very first Daring Bakers Challenge.

For this November 2009 challenge, the Daring Bakers are taking out their woks: yes, we are frying. But all the same we still need our faithful rolling pin to do the hard work. This month’s host, Lisa Michele of Parsley, Sage, Desserts and Line Drives chose the Italian pastry, Cannolo (Cannoli is plural) – a fried, tube shaped pastry shell filled with mixed creamy fillings of sweetened ricotta cheese, chocolate, candied fruit or zest and sometimes nuts. It can also be filled with pastry cream, mousses, ice cream etc. The origin of cannoli dates back to Sicily, where it was prepared during the Carnival season or Mardi Gras and it is said to be a symbol of fertility.

In all honesty, when it was announced that we would not be baking this month, I was very disappointed. But it wasn’t long before the Cooking Ninja rose to the challenge and tackled it with a gusto. I did however run into a few problems with my cannoli, it wasn’t going as well as I expected. In fact I almost throw in the towel on this challenge as I was going no where with my dough. It kept ballooning up like a little pregnant blob, while everyone else turned out beautiful except mine and I had no idea why. Using all my Ninja spirit I gave it one last try, and I’m glad I did as it finally turned out exactly how it was supposed to be. I wouldn’t be that head banging frustrated while making this cannoli if I had only RTFM: the most important thing to remember when making this is to ROLL the DOUGH REAL PAPER THIN and make sure the cut out is 3″ to 5″ big. Duh! So now you know the trick, so please don’t make the same hair pulling mistakes like I did.

For Cut Out Shaped Cannoli

(The dough is not rolled thin enough and cut out is too small.)

The shell itself is very tasty – crispy, lightly flavoured with cinnamon & wine and only a hint of sweetness. Even without stuffing, it’s quite addictive. With the filling, it brings you to another high in the taste department. Simply delicious!

Now if you didn’t roll them thin enough like I did with my first 2 batch, your cannoli will taste like puff up deep fried pastry – like deflated donuts. They are still very good and addictive, just not crunchy 🙂.

You can replace the wine with fruit juice like grapes, orange, cranberry, apple juice etc (any sweet fruit juice) but add a little more vinegar, this is to ensure that there is enough acidity to relax the dough so that it is easier to work on.

No Cannoli tubes? No problem! Just saw off a few sticks off a broom or mob handle. Voilà, you have cannoli tubes. Or you can wrap your dough around pasta shapes like penne or rigatoni or cannelloni – this works too. 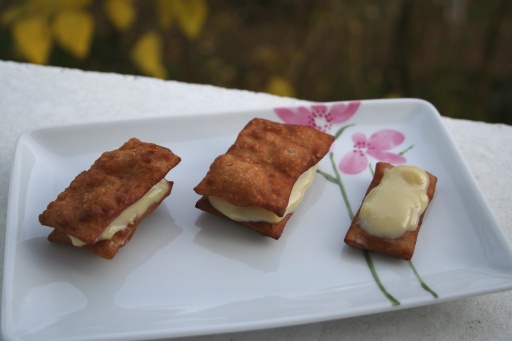 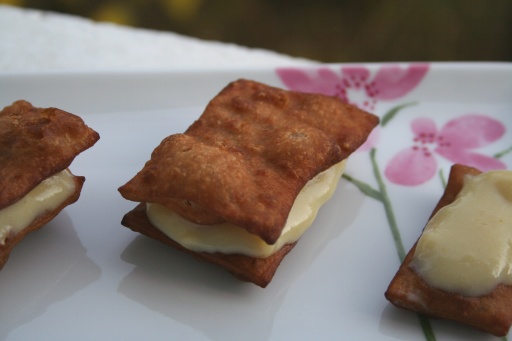