Yesterday we celebrated mother-in-law’s 65th birthday. Little One was all excited wanting to put on her best dress – the chongsam that my sis bought for her to wear during Chinese New Year. So she was all pretty and dressed up, patiently waiting for grandparents to arrive and playing on her own while I was tackling lunch. What a little sweetheart!

For the Aperitif, we had Hummus & Pita. I had made Hummus a day or two ago so that’s chilling in the fridge, but nearly forgot to make my Pita. Phew! My parents-in-law loved both but they marveled at my delicious Pita the most, asking me for the recipe. Hehehe! For the entrée, mom-in-law brought 3 ramekins of snails bathed in… mmm… delectable… butter, garlic & herbs. Only 3 of us had this delicious dish while Pierre stayed clear off it. He doesn’t like snails or oysters – 2 of my favourite & yummy friends. LOL!

Then came the Main Meal, I made Szechuan Prawns & stir-fried Brussels Sprouts with rice . As mom-in-law wanted something exotic & spicy, Pierre suggested this dish as it has been a year or so since I last made it, plus his parents like this dish very much. This time around, I used ready-cooked prawns bought from the supermarket and used chives instead of scallion/spring onions. Chives are less flavourful than spring onion but it’s a good alternative. I tried cooking both prawns and Brussels sprouts & rice at the same time but ended up in a slight disaster with frying pan slightly over turning with hot oil on counter top. With limited space for wok, pans’n pots on the same stove top, it’s not surprising! So I ditched that multitasking plan and finished cooking rice & prawns before tackling the vegetables later on. I sincerely don’t know what’s so bad about brussels sprout that a lot of people don’t like: it’s fresh, crunchy and delicious like cabbage. Little One hardly ate her lunch because she had too much of hummus & pita but all the same, she ate the Brussels sprouts that I put on her plate (she refused to eat it during dinner however), while Pierre avoided it like the Black Plague.

As for the dessert, birthday girl wanted Tiramisu for her birthday cake. Originally I wanted to make it from scratch but in a simpler version, then I realized the day before that they were coming for lunch on Wednesday instead of Thursday as I thought. So changed of plans and made everything with store bought sponge fingers & mascarpone. I made this tiramisu in 22 cm springform cake pan lined with baking paper on bottom and sides, and it turned out more beautiful than I thought. We could clearly see the pretty built-up layers of the tiramisu. It was scrumptious as expected but poor Pierre complained that it was not sweet enough for him (I think he had too many of DB’s tiramisu challenge).

We almost forgot the presents for her. Unfortunately mine didn’t arrived on time. Shh… I got her Artisan Bread in 5 minutes a day. Hope she likes it and is able to use it sans problem (don’t forget she’s French and reading texts in English isn’t easy). So we only have Pierre’s gift to present to her… She opened it, looked at it thoroughly, looked back blankly at Pierre ‘What is this thing? Are you sure it’s for me and not something for your dad?’ LOL! The look on her face was priceless! You see, Pierre got his mom a small external hard drive for her to backup her data from her laptop – a very useful gift. When we told her what it is, she said ‘You got to be kidding me, right? I don’t even know how SMS works, how am I going to use this?’ Guess either Pierre or my father-in-law have to give her some crash course on using her gift.

So what has all this got to do with today’s recipe? There’s no connection really. Just thought since we are talking about this delicious full course lunch, might as well add in a heavenly breakfast that I did a while ago. I found this recipe last year online and decided to try it out. Boy, was I glad to have found it – it’s the best waffles I ever had in my life. I tried turning this into pancakes one day but it didn’t turned out as well as waffles. Guess it is just a waffle recipe. If they are this good, what took me so long to blog about it you might asked. Well, each time we made this, we kept stuffing our face too fast to remember to take a picture for the blog, that’s why. LOL! Pierre made a little sacrifice for this, waiting patiently for me to finish photographing his waffles before chopping it down in seconds. Below recipe is my adapted version. Do try it today ; I promise you won’t regret it! 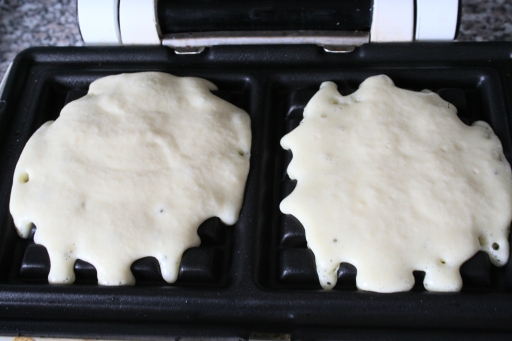 They are perfect, soft if you cook them a short time, crispy if you wait a little bit longer. Heavenly with Nutella spread…just can’t stop eating these waffles. Be warned, they are so good that you might over eat and ruin your appetite for lunch! 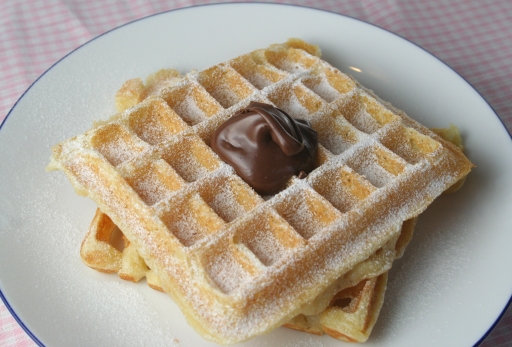